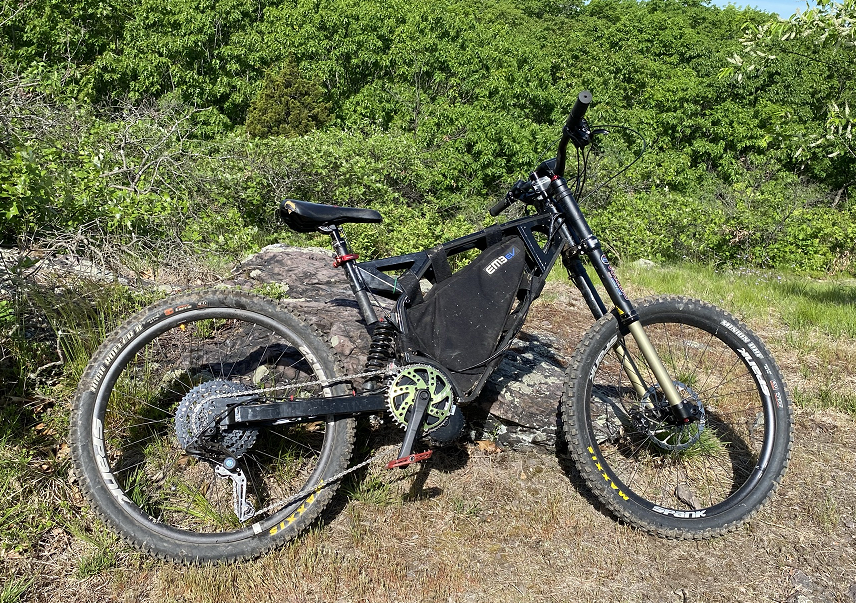 It’s been awhile since I posted. I tore my Achilles tendon in August of 2020, so obviously didn’t ride for awhile. The recovery was a long road, had to learn how to walk and rebuild strength and it’s still a work in progress. I did get back to riding and working on my Ebikes in 2021, and finally achieved a dream going back a few years: to convert my Electric Enduro Bike (EEB) frame to a mid-drive setup.

I have considered a lot of options, and this build has cemented my decision to work with mid-drives only going forward, at least for trail bikes. I’ve had the old EEB build with an Edge Hub Motor at 72V upto 50 MPH according to the Cycle Analyst and iPhone GPS apps. It’s fun, but not great on the trails to have a 100+lbs bike with a huge amount of weight in the back. I took it out for one last ride in hub motor form and took a few pics to remember it with the Edge 1500 Hubmotor at 72V and 60 A (5000W):

I’m very intrigued by the new Bafang Ultra motors with different frames including Frey, Lunacycle, and some other Chinese sourced options. Definitely want to build or buy one of those, but that will be a different article.

The tipping point came when Lunacycle released V2 of the ludicrous BBSHD motor. I have one of the early Luna Ludicrous controllers on my KHS 7200 build that I bought as a complete bike. It’s is awesome, and if it had more ground clearance would be just about perfect for me. I still love it and knew I wanted another one. These new controllers are incredible and have a lot of sick tech, just read their article for the background.

I was approved to buy one and got it along with several other items I would need to make the EEB viable a a mid-drive. A huge resource was the knowledgebase article from Paxtana on the Electricbike.com forms. I finally took the plunge and tackled the last piece of bike maintenance that I had avoided to this point: bottom bracket removal. Honestly, with the right tool and this article as a guide, it was pretty simple! I went through a lot of steps and learned a lot, and also needed to buy yet more tools, but again the build is part of the fun and the finished product is rewarding and satisfying.

Well, I can’t say it’s “finished”, because I haven’t even installed the new Ludicrous V2 controller yet. I wanted to try it out stock and make sure everything was in place. To get to this point from the last build, I had to do the following:

So this took me several days and lots of tweaking, but riding the semi-finished product is a revelation. The bike is much lighter overall, but even better the distribution is fairly even. It can climb with no issues. I’ve added several loops to my backyard trail, and now I can get in about 2 miles every day without leaving home. I would have never been able to navigate some of the tighter stuff with my old setup. The new one isn’t as agile as my KHS 7200 build, and the hot rod programming combined with more weight makes it not as “peppy” as the ludicrous BBSHD. I’m a little scared about the V2 ludicrous, since it sounds like it makes ridiculous power.

Still several things to do:

In the meantime, I’m really enjoying riding my mid-drive EEB and my KHS 7200 build almost every day. More to come about the latest setups and the trails I’ve been building in my backyard.