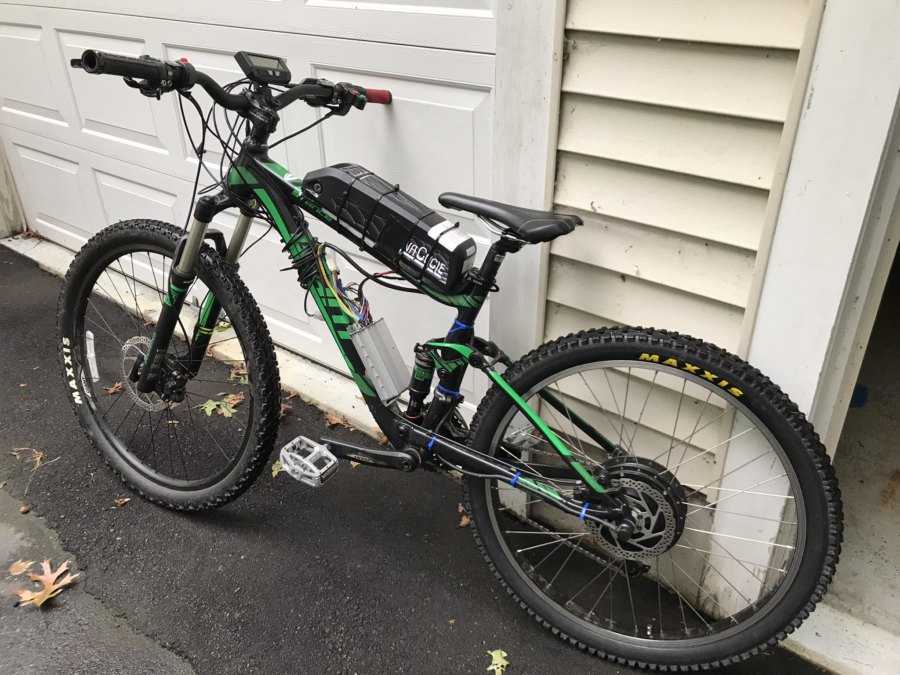 After building a couple Ebikes, I wanted to understand more about how mountain bike tech had changed. I went to my LBS and ended up purchasing a leftover Giant Stance 2 from 2016. This is a low-end “trail” bike with 120mm of travel. MSRP was about $1500 in 2016, but I got it for $1000 OTD.

While I was at the LBS, I kept asking about moving upto a higher model. They let me ride a carbon fiber $10K Trek mountain bike in the parking lot to see the difference and maybe get it out of my system. Here’s a pic of it below. It was a little too big for me, and had clipless pedals, but I could definitely feel how nice it was and the difference of the better components and suspension. However, it was not a $9K difference to me. 🙂

Anyway, back to the bike I could afford at the time, or at least buy without my wife killing me. Here is the geo for the 2016 Stance 2, mine was a small with 15 inch frame:

Since it’s a trail bike, it has a steeper head angle than some of my other bikes that are more downhill oriented, but it does have the low top tube and other characteristics of the newer bikes. I started riding it on the trails and actually got into decent shape. Here was a time I went to some local trails and started to get a little cocky. I was bombing down a trail and envisioned myself jumping this gap, but I didn’t make it. Luckily, it’s not as bad as it looked. I actually hurdled the bars and landed standing up, “just like I planned it!” When I looked back, my bike was wedged in the ground and standing straight up like that.

Since it was on the lower end of the spectrum, it came with a front derailleur and 9 cogs in the rear. The front shock and rear had qr dropouts, so they weren’t as stiff as they could be as I learned with my 72V EEB and KHS 7200 builds. To hit the price point, this bike had a rear flex point rather than using a true pivot, like on the more expensive Giant Trance.

Although it would be cheaper to just buy a better bike, I ended up swapping parts around. I moved the slightly better fork from my daughter’s Commencal Junior HT to the Giant Stance. I converted the Giant Stance to 1x with RaceFace parts and moved the SRAM NX groupset over from the Commencal to the Giant as well. Definitely not cost-effective, but I got some good experience at installing suspension forks, groupsets, tuning derailleurs, and assembling and disassembling headsets. I had to buy a few bike specific tools to get this done, but I’ve used them a few times so it’s been worth it.

I started to wonder how this bike would perform as an Ebike, and I had so many parts lying around I ended up installing one of my MAC rear hub motor kits. The Stance has qr dropouts, which made it easy. The problem was installing the Lunacycle shark pack battery since it was full suspension, there was very little space in the triangle. I had enough to install the controller, and was going to mount shark pack under the down tube as I’ve seen in other builds. I wasn’t too sure about drilling holes for the rivnuts to make it sturdy, so I tried mounting it on the top tube as seen in the picture. It kind of looked like a gas tank and serves the same purpose so….

I rode it a few times and it was…. Pretty bad. Obviously having weight up high is less than ideal. It also made it awkward to pedal. It did feel nice to have the full suspension, but overall it didn’t work. In retrospect, I could have switched the shark pack to a backpack, like I did with the Santa Cruz Heckler Ebay build, but I ended up dismantling this and restoring it to a pedal bike.

Lunacycle was selling this exact bike with the BBSHD, but I thought it “uddered” too much and was looking for more ground clearance than my KHS 7200 with Luna Ludicrous BBSHD. Anyway, it didn’t work out, but great learning experience with this particular build.