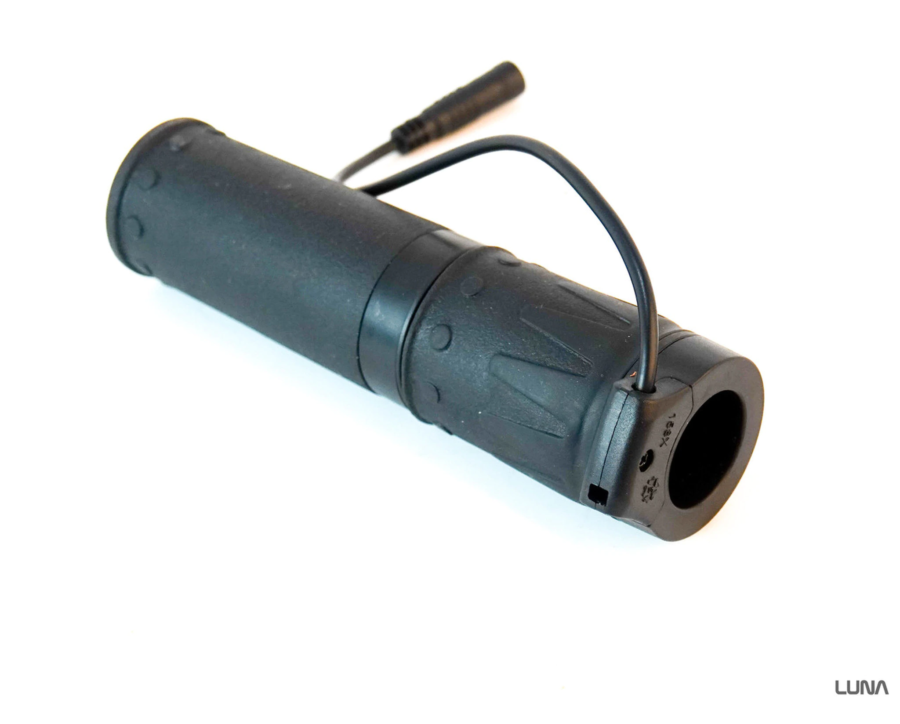 There are several types of throttles that I’ve tried, but my favorite is the Bafang right half-twist throttle that I got from Luna Cycles, like the one pictured up top. It uses the nice Higo connectors that are waterproof and good quality. It’s personal preference, and people all have their own opinions, but the right half twist feels the most natural to me, and works best when I ride on rocky trails. It gives me the best control too, since I can modulate the throttle and by holding the static outside part, I don’t accidentally “blip” the throttle when I hit a bump or when I’m just standing there holding the bike. You don’t want it to be like blooper videos on YouTube where the poor person gets pulled along by a motorcycle or dirt bike.

I guess you can get used to any throttle, but switching to the right half-twist really made me enjoy riding a lot more.

My Luna KHS Enduro Ebike came with this type of throttle. It has the same Higo connector as the Bafang half twist throttle, with good build quality. It has a nice low profile and I didn’t have any issues as I did with other thumb throttles I tried. The first several I got with my initial builds were generic Chinese throttles that had several problems:

Below are two early throttles I tried. “Thumb Throttle A” was terrible, you had to move it to the right to accelerate, and every bump would cause the motor to jerk. Very hard to modulate and it was junk quality that fell apart after a couple of rides. “Thumb Throttle B” was basically a cheap knock-off of the Bafang one. It was ok, but not as precise or well-made as the Bafang. IIRC, this one worked ok, but the wires for the crappy connector got destroyed.

The only downside for the half-twist is the grip itself. They provide a left grip and half a right grip, but I prefer to use locking style grips like these Half-Nelson from RaceFace (available on Amazon):

With the half-twist, I have to cut my nice grip to work with it. 🙁 A tip if you go this route, be careful when you mount the grip to make sure it it doesn’t hinder the throttle from springing back when you release it. This can make the throttle slow to close, or worse, get stuck “open”. I ran into this and I’ve seen posts from others on the forums, just trim it clean and even leave a small gap so the throttle mechanism can spin freely. I definitely prefer the locking grips so they don’t twist and I don’t need to use hairspray or other adhesive that can be a PITA later if I want to remove it.

As for mounting the throttle on the left or right, I prefer the right so it’s like a traditional motor cycle (I’m right handed). It does make some sense to put it on the left, especially if you have a 1x drivetrain. This means you don’t have a front-shifter, so there is one less item on the left to interfere with the throttle placement and usage. I tried this, but just didn’t like it, I guess my left thumb has bad coordination. Maybe this is why I like PC games with a mouse and keyboard, but I’m terrible at console games and with thumbsticks on the controllers. :p

There may be a lot of items on the bars competing for space in the cockpit: power switch, speed switch, display, in addition to the throttle. I get why some people go minimalist like the Eggrider v2 bluetooth display (available at Luna Cycles).

There are also Pedal Assist Systems (PAS) where you wouldn’t necessarily need a throttle. I’ve used the “cadence sensing” version of PAS with my Bafang BBSHD on my KHS Enduro Ebike from Luna Cycles, but I don’t really like it on the trails. It adjusts the speed based on how fast you pedal, as opposed to the more sophisticated “torque sensing” version (like on the newer Bafang Ultra motor and m600 motors). Karl from Electric-Bike Blog has some great articles where he shares his “special sauce” on adjusting the programming for the BBSHD, but I’ve been happy with my throttle, so I just use PAS on the road on the way to the trails sometimes. I do pedal along and achieve “my own” PAS by adjusting the throttle. However, I am intrigued to try a motor with torque sensing, so I may need to get one for my next Ebike!