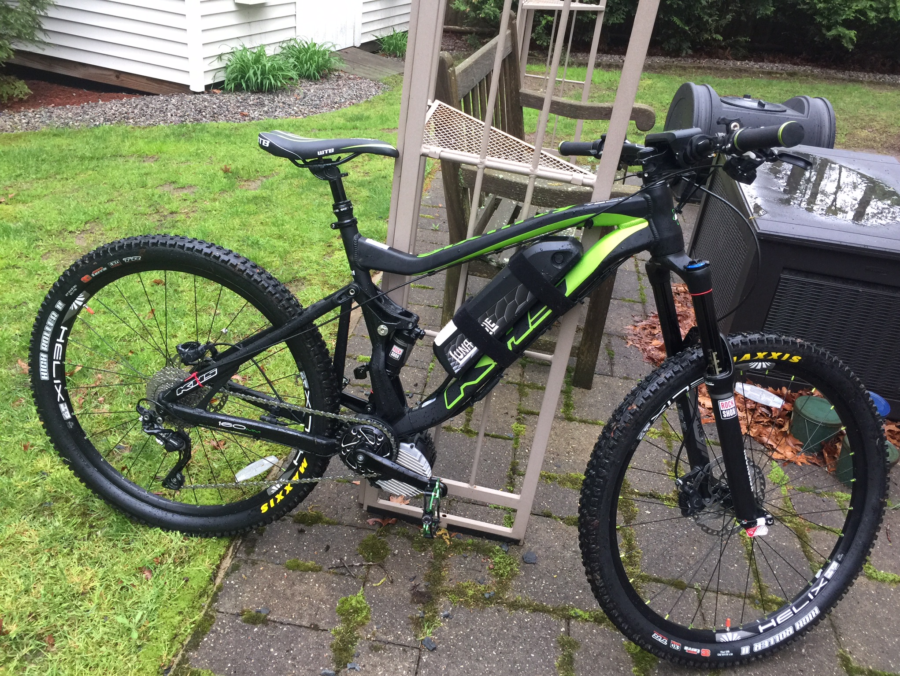 In the Spring of 2017, I definitely wanted to try a mid-drive after several hub motor builds. It seemed like most enthusiasts were talking about the Bafang mid-drives, the BBS02 and the newer (at the time) BBSHD. Luna Cycle, A newer company was making all these great products at pretty amazing prices. I researched building my own, but I didn’t think I was quite ready to tackle the more complicated mid-drive install, so I decided to buy a complete bike.

I knew I wanted the following:

I decided to pull the trigger on a KHS Enduro bike with the Luna Ludicrous BBSHD motor. I had read reviews, such as from Karl at ElectricBike-Blog.com, and knew I wanted to go with this option. KHS is a company based in Taiwan that offers decent bikes at discounted prices. It was a 2016 model that retailed for $3,699. My order with shipping ($100) came in at $4,264.90. This was pretty crazy when the BBSHD kit was around $700+ depending on the options. It even comes with a 21 piece Luna toolkit, an LED light, AND a bell! Here is the geo for the KHS 7200:

Since I’m on the shorter side, I wanted to order a medium frame. Generally, I would go with a small, but many Ebikes are large in order to fit the battery in the triangle, especially on a full suspension bike that will probably have less room. They offered it in medium, but said I would need to go with a backpack battery. I figured I would give it a go.

Something went wrong in processing the order and I received a Large frame with the shark pack. I contacted Luna and they were very responsive, but I didn’t really want to ship the bike back and they didn’t have a medium available at the time. I hacksawed a seatpost so I could slam the seat all the way down. Next, I reshuffled the spacers for the stem so it was as low as possible. I found that I could ride it pretty well like this.

Of course it rained the day I got and assembled the bike, so I only had a very brief ride, but right away I knew it was something special. When I took it out the next day, I was amazed. Now I could use the gears and with the 30t “mighty mini” front chainring, it had ridiculous torque. I mean, it would lift the wheel off the ground, it was awesome! I could then shift to a higher gear and hit about 30 MPH. The acceleration was much better than my hub builds at the time. My 72V EEB does accelerate harder when I race my own bikes, but the mid-drive is so satisfying and much better suited to trails.

Going on the trails was a revelation. I could put it in the granny gear and just cheerfully climb up ridiculous grades. Since the motor and battery were in the middle, the weight distribution was great and I was riding faster than I ever had through these trails. I could spin the tires in sand or mud and was just having too much fun.

The suspension was excellent. Since I had gotten back into Ebikes and mountain bikes, I had ridden low-end components with lots of travel (DNM fork and rear shock on my 72V EEB), and a low-end components with “small” 4 inch (120mm) travel on my Giant Stance 2 (RockShox 30 Gold TK Solo fork and Monarch R rear shock). This bike had a RockShox Pike fork with 160mm of travel and RockShox Monarch RT3 rear shock.

It was so smooth and so plush! The large travel on my EEB is nice, but it’s not “refined” like the RockShox components. The higher end Pike was also much stiffer with a 15mm thru axle compared to the QR dropouts on the 30 Gold TK Solo fork. I loved it!

There were a few downsides. #1 is that since this was a relatively modern frame (2016), it has the curved downtube that forces the BBSHD to hang a little lower. This has been called “uddering”, like a cow. I ran into this (literally) when I was on my backyard trail and went to hop over a log. I bashed the motor into the log, and it was almost enough to send me over the bars. I know now to shift my weight to account for it, or just ride around most logs, so it’s not ideal.

The other thing is that you need to be on top of maintenance, regular bike maintenance like lubing the chain, adjusting the gears, etc. Also, you should tear down the motor and regrease the internals periodically to ensure long life. I haven’t done this yet myself, but it’s on my list. Finally, things may get loose over time, so you may have to retorque the brackets so the motor stays snug.

Because of the motor, you may go through chains and cogs more frequently. Some enthusiasts limit the gears they use to avoid using too big or too small of a gear that exacerbate wear. Since you have the motor, you don’t necessarily need 10 or 11 gears anyway.

Some guys go all the way and use an Internally Geared Hub (IGH). With this setup, the gears are built into the rear wheel, so you just have an optimal (straight) chainline from the chainring to a single cog. This is definitely on my to-do list, but many IGH hubs are not meant to deal with a lot of power. The Holy Grail of IGH is the Rohloff. It is a piece of art from Germany and like other high-end German things, it’s expensive. Luna actually offers their high-end Apex with a Rohloff! It’s a great design and even has a sacrificial piece to be the weak link that will break first so it can be repaired fairly easily.

I’ve made a handful of changes to my KHS 7200. I swapped the shark pack that only had GA cells for the triangle pack from em3ev with Samsung 25r cells. This really pepped it up so that it’s now able to handle the ludicrous amp draw. I broke a spoke in one of the wheels, so I brought it to the LBS to get repaired. While it was there I had them convert both tires to tubeless. I’m not running my favorite Maxxis tires anymore, since this LBS didn’t have a tubeless ready version in stock, but the advantages of tubeless make up for it. I haven’t tackled converting tires myself yet, but will follow a tutorial and try this soon. Finally, I got a slightly larger 36t from chainring for slightly more top speed without sacrificing the low-end. It’s great for the trails I ride so I can get there a little quicker and still climb the steepest grades.