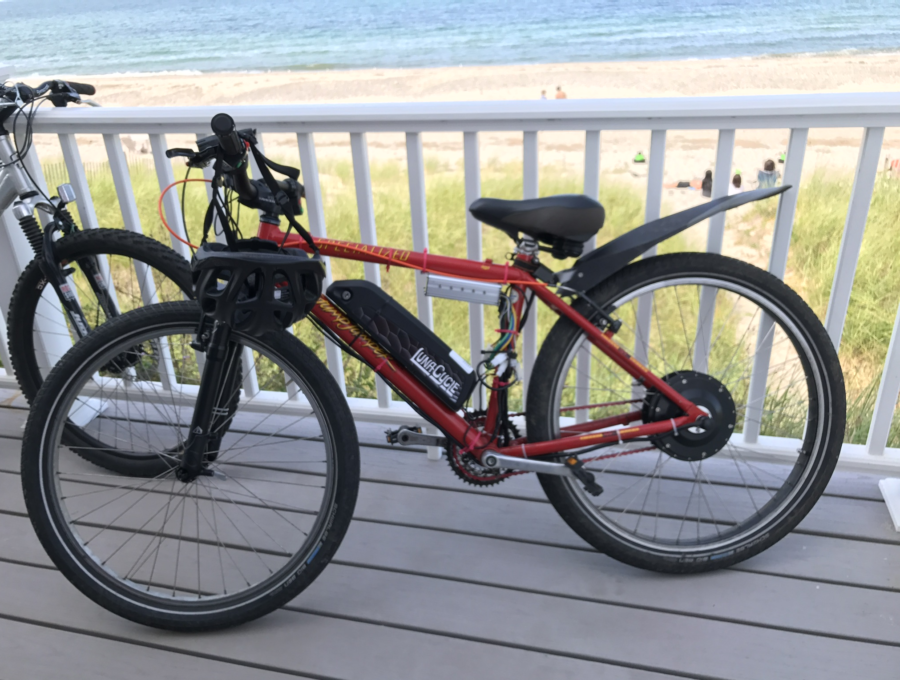 This is how my final version of my Stumpjumper Ebike turned out. Looked and felt a lot better than the original build, and now it was a mix of “retro modern”. As I got more into Ebikes and back into mountain biking, I also found that a lot had changed in mountain bike technology.

Cantilever brakes had been replaced by vbrakes, but at this point vastly superior disk brakes were common even on lower-end bikes.

My Manitou 2 front suspension fork had about 2 inches of travel, which was cutting edge back in the early 90s. Now it was common to have 4 inches for trail bikes upto 8 inches+ for downhill bikes. Full suspension bikes were much more common and had these multilink designs. Seemed like they had figured out how to get active suspension (while pedaling and braking), which was still a work in progress in the early 1990s. To make matters worse, my Manitou 2 was completely seized after years of non-use and neglect.

I switched to the rigid fork from Amazon in the picture. This bike had a one inch threadless steerer, which greatly limited the availability of suspension forks. I later found and purchased a vintage RockShox Judy fork on eBay, but I’ve run into problems trying to get the Stumpjumper back up and running. That’s another story though.

The Stumpjumper had a 21 speed drivetrain, with 3 chain rings in front and a 7 speed cog in the rear. Now mid-range bikes and higher were 1x, with one front chainring and a wide-range 9, 10, 11, or even 12 speed cogs. The front chainrings for 1x setups are “narrow wide”, meaning alternating narrow and wide teeth to help keep the chain engaged, since there is no front derailleur cage to help keep the chain on. Newer rear derailleurs also have a clutch to help prevent chains dropping. This saved some weight and eliminated the front-derailleur and shifter. After I broke my rear derailleur deep in the woods, I ended up going to a single speed setup. This went along with the minimalist theme, and I had the power of the motor anyway.

The geometry design had changed a lot as well. My vintage bike had a steep head angle, shorter top tube, and longer chainstays. Newer bikes are “long and low” with “slacker” head angles, longer top tubes, shorter chainstays, lower top tubes for better standover height, and often sweeping down tubes. I wasn’t able to address this on my Stumpjumper though, so it would have to wait for other bike Ebike builds based on eBay purchases.

Another big changes was to go from a forward leaning attack position to a more laid back position with much wider bars. I decided to spend a little more on parts and try to match them together better. I was drawn to the RaceFace brand for good quality without being too exorbitant, so I used a bunch of their parts. I also switched to a lower profile “shark” pack from Luna Cycle, since my high performance em3ev pack found a new home in my KHS 7200 Luna Luda build.

I replaced the cantilever brakes with Avid BB7 vbrakes that were a step up. I would have liked to go with disk brakes, but the frame did not have disk mounts in the rear. There are some “universal” options to do this, but they didn’t seem worth it. Front disks were compatible with my new rigid fork, but I decided to focus on my other builds that had better starting points.

Here it was fresh from the new parts installed, most were purchased from Amazon (linked below):

It looked better, and was a little better to ride, but I decided to keep it for quick jaunts around town and stop trying to make it trail worthy. The highlight was when I brought it to our summer vacation week in Sandwich and I used it to go from our rental house to my sister’s rental house several miles away. My wife and kids drove there separately, but I beat them by a fair amount because of traffic while I was able to cruise there at almost 30 MPH. The beach picture at the top was a great way to remember this build. I tore it back down, but recently tried to get it up and running now that I scored the RockShox Judy fork. I even converted the front to an Avid disk brake. I’ll need to troubleshoot and report back on that, but having issues where the motor is not seating properly in the dropouts…